I am delighted The Water Bearer has been selected in the new 10TH ATHENS ANIMFEST amongst 2000 submissions for the Marathon Selection. The Festival is running from March 26 to April 1, 2015 in Greece

We are delighted to announce the Water Bearer has won an Award for Best Ecological Animated Film at the IFFEST Document.Art. XXI Bucharest, Romania

We would like to thank the Mr Nicolae Luca, the festival director, Ileana Danalache and Mihaela Ene.

And a huge thank you as well to the Jury that selected our film!

The Water Bearer  will be screened  at the  The 9th Science Film Festival THE WORLD OF KNOWLEDGE , Saint Petersburg, in Russia between the 20-24 October

The International Science Film Festival World of Knowledge was organyzed by Lennauchfilm studio and the Centre of National Film studio in February 2006.

The festival improves every year and is growing in an organic way. The festival program includes the regular International Competition and the Special program.

The main prize of the Festival is the figurine The Tree of Knowledge, which is a symbol of a person who thirsts for knowledge and novelty. The sprawling branches of the tree are inevitably burdened by fruits, symbols of reason. The apple falling from the tree is a sign of revelation to a person seeking knowledge.

Science popularization has an obvious strategic value for national development. Documentary cinema has a recipe for sparking interest in science, technology and culture from all people.

Watching the invisible… discovering the unexplored… trying to glance into the future… Everything is possible in the inquisitive and imaginative minds of cinematographers!

The water Bearer will be in the official selection at  IFFEST Document.Art. XXI, 2014, Bucharest, Romania on the 16, 17 and
18 October

The film will be eligible for the following award

IFFEST DOCUMENT.ART. aims to stimulate and promote art, ecology, and tourism film, as well as make a significant contribution to its audience’s cinema culture.

A series of complementary activities are organized under the umbrella of the Festival, with a view to making it more diverse and attractive. These activities include book launchings, art exhibitions, workshops, etc.

IFFEST DOCUMENT.ART. is organized by the Romanian Film Association “Document.Art,” with the support of the following partners.

We are very pleased the Water Bearer has been selected to participate in the San Diego International Kids’ Film Festival (September 5-7, 2014) 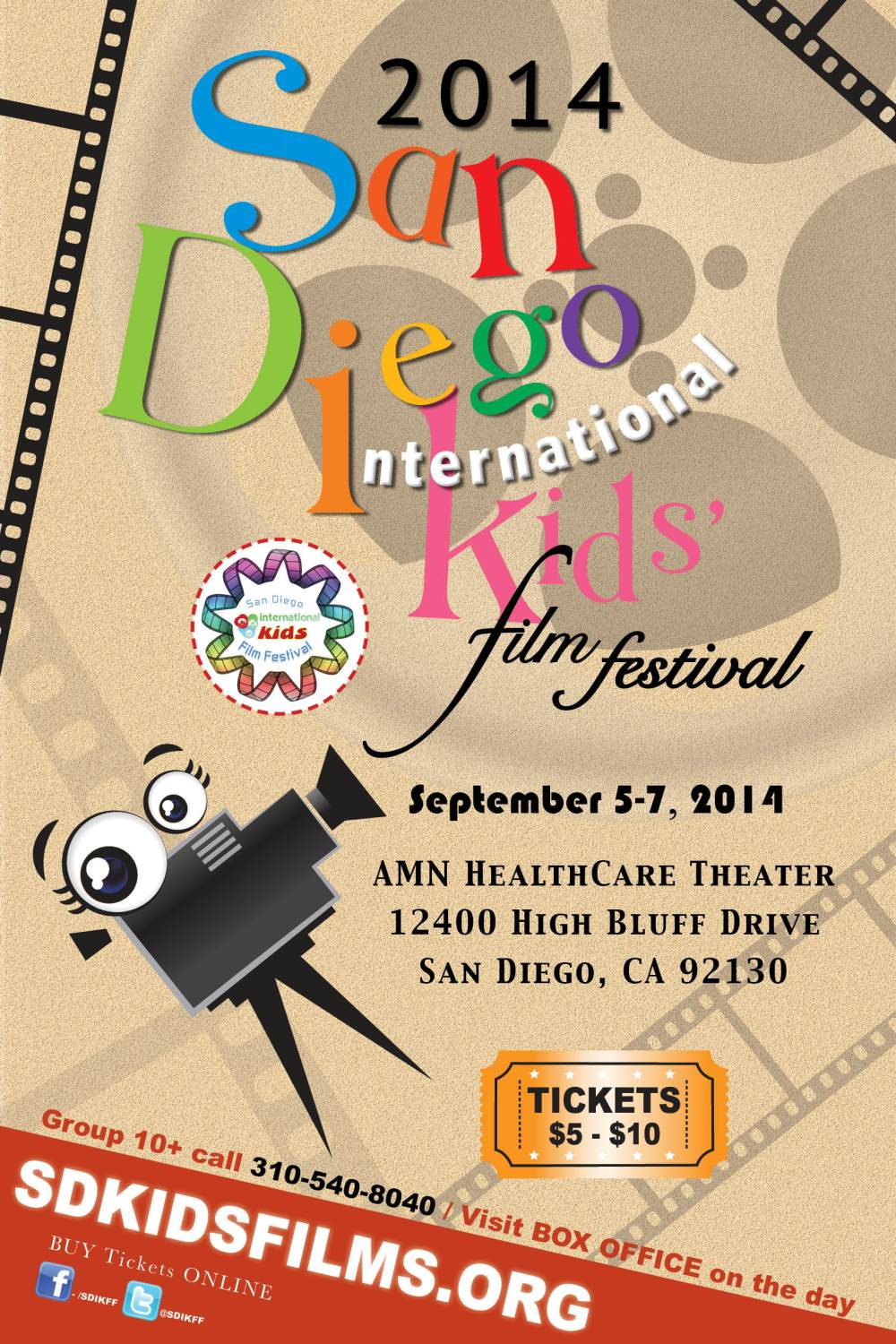 The San Diego International Kid’s Film Festival promotes the idea of entertainment with education. Supported by many across the world, the festival supports the entertainment and education industries by showcasing international films, and gives young, aspiring filmmakers a channel to communicate to an international community. The resulting collaboration produces a unique multi-cultural experience, engaging young viewers with positive media, as a diverse education.

The Water Bearer  will be screened  at 2014 FARCUME: Festival de Curtas-Metragens de Faro, Faro, Portugal, between the 27 a 30 August

FARO 1540 – Association for the Defense and Promotion of Environmental and Cultural Heritage of Faro, after the success of the last three editions of FARCUME – Short Films Festival of Faro, is organizing the 4th edition of this Festival to be held in the city of Faro from 27 to 30 of August, 2014.

It is intended that in this edition the goals already reached in last editions in terms of quality and participation will be consolidated and that the Festival will stand as an international and cosmopolitan Festival. It is noted that FARCUME will have, from this year onwards, an extension in Brazil , in the city of Boa Vista , in Paraíba , named as FARCUME Brazil . Therefore FARCUME happens to be one of the biggest festivals of Luso-Brazilian short films, with strong advantages in exchange of works, methods and knowledge between the filmmakers, screenwriters and actors from both countries, in addition to boosting the cultural politics of the two cities involved, engage their identities and enhance their local potential.

The main purpose of this Festival remains the same: publicize and launch new talents as well as promote near the public the excellent works that are done in this area but not always have the desired and deserved promotion.

In other words, FARCUME within an informal environment, good mood and relaxed atmosphere intents to reward and recognize the dedication, commitment, creativity and merit of directors, actors and technical teams that, with modest means, can develop works of great quality.

Given the principles and goals of ” FARO 1540 ” , which even has the status of NGO (Non Governmental Environmental Organization) the Festival will continue to have a strong environmental concern and sensitivity alerting participants not to present short movies claiming or encouraging disrespect for the environment, human rights inequality or animal abuse. It will be further developed an Environmental Management Plan specifically ” designed ” for this event to ensure optimization of the resources needed for the promotion and accomplishment of the event and management of generated wastes. As in the previous editions FARCUME will be a “Zero Carbon initiative” , ie , it will be completely free from carbon emissions, one of the elements responsible for the greenhouse effect that contributes to the climate change phenomena .

For more information on this project please visit our web page : http://www.farcume.faro1540.org

We are very pleased the Water Bearer has been selected to participate in the Seoul Guro International Kids’ Film Festival (GUIKFF) during July 25-29, your film, together with other 7 films,  representing the 2014 SDIKFF’s films to be screened in the 2014 SDIKFF Special Screening Zone.

We are very pleased the Water Bearer has been selected to participate in the 5th edition of  VAFI  in Croatia. Below a little about the festival.

VAFI– International Children and Youth Animation Film Festival in desire to make Varaždin and Croatia a place where children and youth, professionals, our guests and all animation lovers will be able to exchange their experience and make new friendships beyond their own states; a place where children and young people will enjoy films; where they will learn and associate at the same time. VAFI will be held from 22 to 27 April 2014,  the professional selection will be shown will be shown during 22 to 24 April.

As Varaždin being one of the most beautiful and most developed cities in Croatia, it is ideal for hosting the festival in which we want to unite quality, knowledge, professionalism, company, fun, creation and creativity into a  perfect balance. ( you can explore the citadel here )

The film tells the story about how young Mr Stone meets the engineer Mr Latham and together they come up with a marvellous plan to bring water to everyones home in the Itchen valley which still exists to this day. Using drawn and cut out animation techniques it is a beautiful little film which we hope the younger audience will enjoy!

To wet your appetite we have made a little trailer

We had a fantastic time Recording for the film with the talented Sound Designer David Pringle, and actors Paul Mundell and Ellie Mitra

The composer Alex Harwood will be writing our music for Twyford Waterworks.

Alex Harwood graduated with an MA in composition for film from the National Film and Television School (2013), and an Mmus at The Juilliard School in New York (1991), graduated in Composition from the Royal College of Music (1988).

www.alexharwood.com
Alex was composer in residence for the Juilliard Drama Division, during which time wrote for theatre productions in New York and England. Amongst numerous commissions that have been performed world wide are The Happy Prince (cantata for soloists, chorus and orchestra) libretto by Ronald Harwood, St John’s Smith’s Square, London; Untitled (voice and percussion) for Audra MacDonald, Avery Fisher Hall, NY; and Sonatina (alto flute and pianoThe National Flute Convention, chosen repetoire, 2009,USA ; Theme and Variations- written for Sir Ronald Harwood’s 70th Birthday, performed in the presence of HRH The Prince of Wales.

Prizes, Awards and Fellowships include:

Freya Hotson joined as as a 2D Animator to create two playful shots in the animation. Freya has a wonderful talent in capturing characters and movement!

Here below her rough line tests previews for the two shots she has been animating.

A Scot, Freya graduated with a BA in Animation in 2011 from Duncan of Jordanstone in Dundee. Since graduating she worked as an Animation Department Assistant on ‘The Snowman and the Snowdog’ and is currently working as a freelance animator in London. 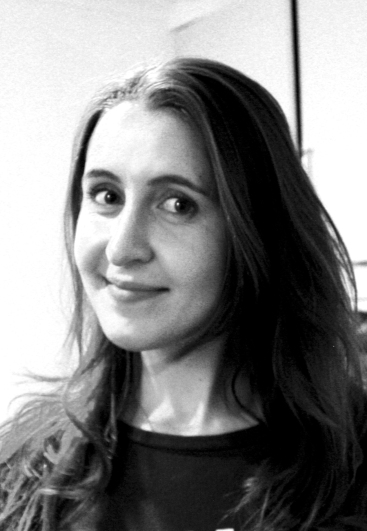 You can view her work at:
Vimeo https://vimeo.com/user2647473
Blog www.running-down-hill.blogspot.co.uk

Here few work in progress still showing some of the shots for the animation. The  artwork for the piece for t it is almost complete. (Click  on the thumbnail pictures for a larger view)

With the visuals approved and the characters chosen, we can get started on the storyboard. This is our favourite time as all the creative juices get squeezed together to create a compelling narrative without worrying ( yet ) about the perfectionism.

Here below the first pages. the full storyboard comprises of 12 pages and around 336 sketches 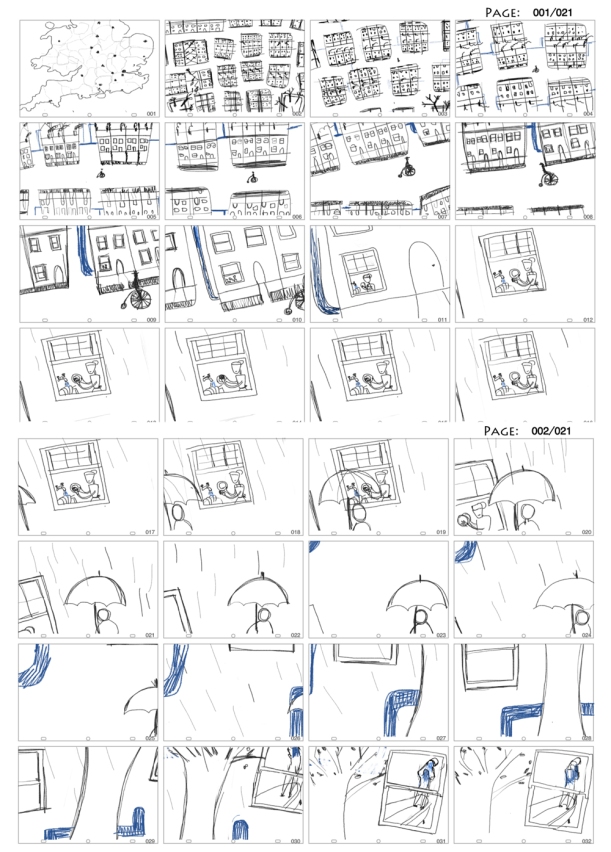 On Our team we have Clare Aburn as Assistant Animator creating some of the loops for the animation.

Clare is an animator and illustrator, who in 2012 graduated from an MA in animation from the UCA in Farnham. Over the past year Clare has worked on several short films, and plans to continue to develop her skills within the animation industry.

Here the full animatic for the animation

After many sketches and scratches on the head we came out with two Designs for Mr Latham and Mr Stone: which one do you prefer? 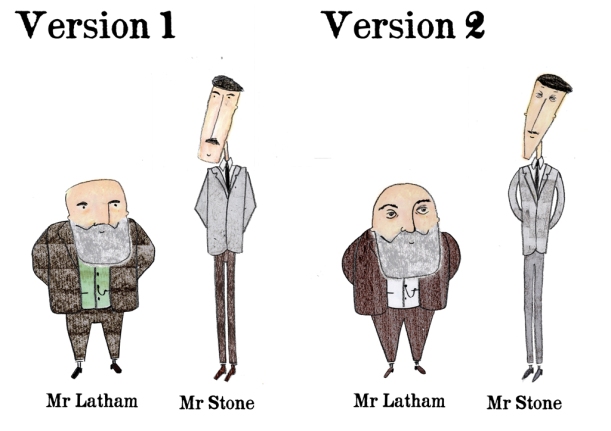 We had a hard time to choose between the splendid Designs created by the students of Twyford St Mary CE School.

But we had to choose… here below the winners!

All the designs were truly amazing, so imaginative and full of details, but we had to select only one winner. To choose the winner we had to take in consideration “character”, “style” and “economy of shapes” for the animation, Daphne’s design needed simplifying to be animated in an economical way. We lost the dots and the hat but we kept the shape, the huge eyes and the warming contagious smile.

We run a small competition at St Mary to draw a mascot for Twyford Waterworks Trust. The winning design will appear in the animation

Here below the wonderful shortlisted Design; and in two weeks we will announce the winner. 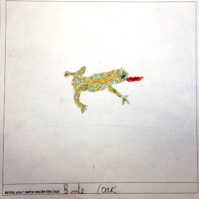 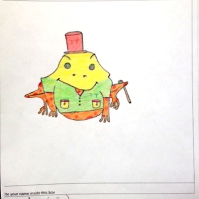 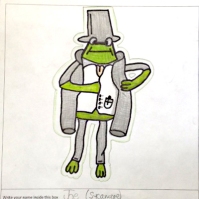 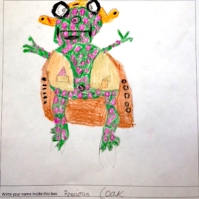